After almost 10 days of rain, July ended with a beautiful sunny day and the first days of August has been sunny and beautiful. Overcast skys returned on Wednesday this week (August 5) and spotty light rain came in on Thursday. Heavier rains are predicted but no real hard rain yet. Here are a few sunny Sitka pictures.

We had a special dinner last week for the volunteers who are leaving in the next week (Laura, Shelby) and those leaving in just two weeks (Amanda, Kaitlin, Lizzie, Kaity, Bethany). Cappie and I fixed dinner and we all watched “New in Town”. If you haven’t seen this “chick” flight, you should. It is delightfully funny and will definitely leave you with a smile.

Our “young man from England”,  James, had his 21st birthday party this past Saturday. His parents, Bob and Sarah, were here to celebrate with him.  It was a mad-hatter theme potluck. Of all things I forgot my camera so I did not get lots of pictures but volunteer ranger Kaity sent me a couple for your enjoyment.

James’ party was not without lasting effects thanks to an attack of the “noseeums”. I woke up Sunday morning with my neck and arms covered in bites. Never saw or heard any mosquitos but the bites look (and itch) like mosquitos. Evidently the warm sun brought out these tiny little mosquito like creatures (who just love a sunny day at dawn) and they can fit through the screens as they are so small you don’t see them . . . which is why they are called “no-see-ums”. Nasty little buggers!  Fortunately a trip to the local pharmacy found a remedy which is made here in the pharmacy. It’s Red Bug with Lidocaine and the best $15 I ever spent.  That was a lasting experience for sure.

Work for me this past week was focused on inventory counts and a few procedures for clearing out inventory items declared obsolete. Amazing how much I have learned about retail selling. It’s really been enjoyable. I love learning new things and finding new ways to make processes easier. In that regard, it’s been a very productive week for me.   Here’s a picture of our visitor center and my little sales area. Thought you might like to see it.

As I teased you last week, the salmon have arrived. You have to look closely at the pictures to see them. The black things that look like rocks are actually salmon. Actually a few were here the previous week but I thought they were rocks and kept saying they had not arrived. Then visitors would go to the bridge in the park and come back telling me they were here. I’d go out the next morning and see nothing again. After several days of this I asked Ranger Kaity if she had seen them. “Why yes” she says. “They look like rocks in the bottom of the river as they don’t move too much as they adjust from the salt water and a long swim, but wiggle just a little with the current” she continued. “Are they black?” I asked. “Um, yes” she says looking at me a little oddly. She covers for me at the desk and I go back out and lo and behold, they are here! See if you can see them. 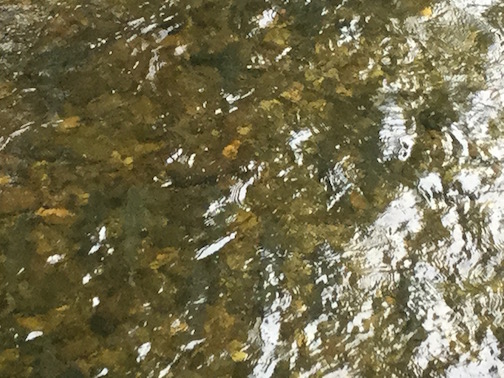 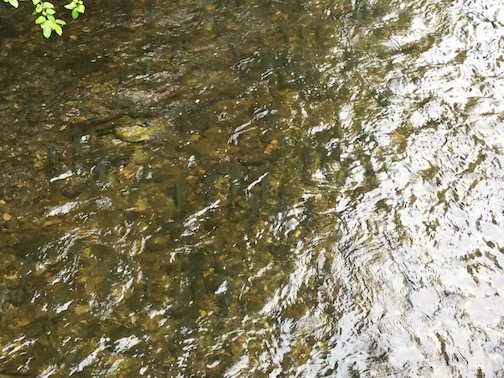 This past Tuesday I heard there was a bear sighting at dusk the evening before at the Indian River bridge in the park. I walked the park that evening with the church group on our weekly spiritual walk but we ended around 6:30. Dusk here comes around 9ish. Apparently, some folks had seen a rather large older bear in the river for some salmon. He came back the next morning along with a younger friend. I came down to the bridge about 7:30 a.m. that morning to see the salmon and take pictures. About 8:30 security came to say they’d found a large pile of “skat” (bear poop) just off the bridge and it was very fresh. While I haven’t seen a bear yet it sounds like our paths were pretty close. So, yesterday I traveled to the Fortress of the Bear as I thought I should maybe learn just a little bit more about these guys just in case our paths crossed ‘more timely’ in the future.

Church news this week included temporary custody of a grand piano. Centennial Hall is closed for renovation now and activities have been moved to new locations. The Russian dancers, which normally perform there, have moved to the Sheldon Jackson campus. However, there was no place for the grand piano. After much searching, and possible some begging, St. Peters agreed to take custody until the new hall is complete (projected sometime in 2018). It’s a wonderful benefit to the parrishoners.  Rev. Julia ends every homily with the lyrics of a song and then plays it on the piano. Those of you who know me know that I love listening to the piano so it’s like a slice of heaven for me every week. Here’s a view of the church pre-arrival. Will get another one for you after the piano is moved in.

Cappie and I rented a car on Thursday so we could investigate the island’s 14 miles of road more comfortably than on a bicycle. We went to the “end of the road” at both ends of the island.

We visited the Raptor Center which was just awesome!  The Eagles were absolutely amazing along with a variety of others.  Here are some pictures to drool over.

And we went to Castle Hill,  now formally known as the Baranof Castle State Historic Site.  This is a National Historic Landmark  which provides a commanding view over the city.  It is the historical site of Tlingit and Russian forts, and the location where Russian Alaska was formally handed over to the United States in 1867. It is also where the 49-star United States flag was first flown after Alaska became a state in 1959.

We enjoyed the island beauty and got some pictures from different viewpoints.

On a more serious note, Cappie decided she needed to go home and left this morning. She’s had a wonderful time I know but it was time for her to focus a bit more on her personal health and get home to do a bit of rest and recouperation. We will all miss her, me especially. However, our friendship will continue and I look forward to a time when our paths will cross again on this volunteer journey.

Also, Melissa’s husband Robert deployed to Afghanistan this past week. As most of you know, he is a colonel in the US Army. Please keep him in your thoughts and prayers as he stands in harms way to protect our country. We look forward to his safe return.

Enough of the serious stuff . . . I’ve also been thinking about what’s next for me. No plans yet but I definitely want to do this type of work again and again. I’ve met new people, experienced new places, learned new things, and my heart has grown. I’m hoping that once this journey ends, I will have left a mark of quality that will be good enough to carry me forward into the next place. For those of you interested in national park volunteering, be sure to go to www.volunteers.gov and check out the many opportunities.

Melissa, Cameron, Tom & Mike are coming on Tuesday. I am so excited! I have a kayak adventure planned as well as a wildlife boat tour. I should have some great pictures next week . . . keep watching.

And finally, to my friends at First Friend K9, take good care of Gus for us. Give him special “hugs” and a little extra Bil-Jac for me. He’ll be with you while the kids are here with me. It’s so nice to have you there to provide such quality care for our 4-legged kids! You are the best!!!

Blessings to all and much love,