Two days in Juneau were filled with new sights and some very nice folks. After arriving and getting settled in Juneau on Wednesday evening, I slept like a log. The weather was cool, a bit rainy, and very light. The hotel was actually good but we didn’t begin on a good note. As you might expect, everything is pricey in Alaska. I knew that and was while I found a hotel for under $150 a nite, I maintained certain expectations that were not necessarily realistic. Air conditioning was not working and that was that . . . however, a sweet clerk never once indicated a problem. She found me a fan and I was good. It wasn’t so much that it was unbearably hot, it was more that the air was stifling. I felt pretty silly when I found you can actually open the windows which made it a perfect temperature. I can’t remember the last hotel I was in where you could actually open a window!

I’d also say the level of cleanliness was a but lower than expected. With so much rain mud is an expectation and so things don’t always appear to pass the white glove test. I was a bit put off by this at first but within 24 hours I got over myself and was embracing one of the most comfortable beds I have ever slept in.

On Thursday I was up early and heading downtown to board the Alaska Bound Tracey Arm Fjorde excursion. We left at 7:30 and were out all day, returning about 6:00 that evening. Skipper Steve and his mates, Nick and James, were great guides and educators. I learned so much about the waterways, glacier, animals, etc. It was an experience of a lifetime. I’ve added pictures that I think you will enjoy. Check out the eagle on top of some ice. Note the deep blue of the ice that has broken off. We watched the glacier calving over 6 times. Incredible. 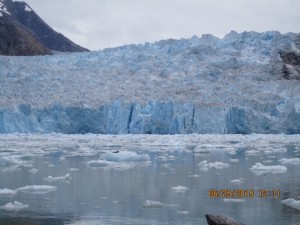 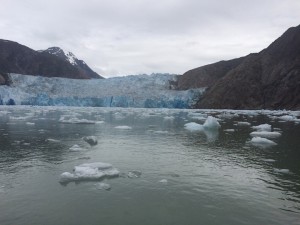 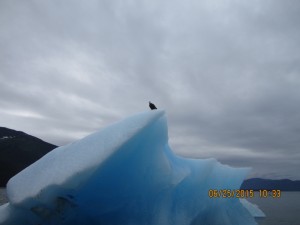 I met a beautiful family on board, The Young’s, who were visiting from Japan. Mr. Young works for the Department of Defense as a teacher of teachers at a military base in Japan. He, his wife, and two daughters (Abby & Maddie) were great company. In fact, they told me about the Alaska Excursions Juneau Dog Sled Training Camp and I immediately booked a ticket for the following day.

The Camp was in Tongess National Park and I met up with the driver in downtown Juneau. After a brief conversation with Andrea, our driver, I learned she lived in Carmel, Indiana for a couple years managing an Assisted Living facility there. In fact, her best friend still lives in Carmel and we plan to meet again when she comes to visit. You’ll see her in the green tee shirt.
Lesson learned: never underestimate how small this world really is.

The dog camp was incredible. The workers there are a combination of locals (who have their own dogs and race them) or temporary workers who found the job on my favorite website, www.coolworks.com.

At the camp, we were pulled by a team of 16 dogs on a cart with wheels. This is how the dogs are trained to pull together as a team during the summer months. They trainers determine which dogs like to lead and which are better followers. We saw the gear they use for the Iditarod, and socialized with all of the dogs. The socialization is mandatory for the dogs and they start the process when they are puppies. Part of our time there was spent holding puppies and loving on them. 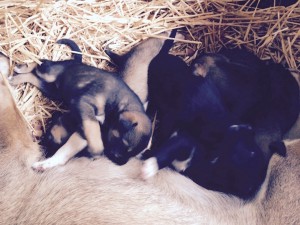 Could not have been more fun. Here are pictures of Robin (our welcome dog) and the sled team pulling us on our journey. 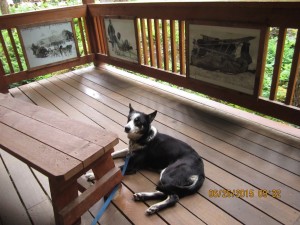 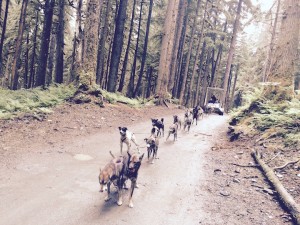 I was scheduled for a Wings Tour that involved flying over the glaciers and landing at Taku Mountain Lodge for a dinner of freshly grilled river salmon. Unfortunately the weather was too overcast and all flights were cancelled on Friday.

Juneau is definitely a tourist town supported during the summer months by lots of cruise passengers. Jewelry shops are everywhere downtown. They say come winter it’s a bit of a desert town as the only ones left are locals and the downtown tourist shops are mostly closed. There is one McDonald’s and one Subway restaurant about 12 miles from downtown. Seems the locals go here as they are more affordable. Food is expensive but good. Love the plentiful seafood!

June 27, 2015
Left Juneau this morning for Sitka. The ferry is a new experience for me. I was so nervous (my usual state when I don’t know how things work!) I think I have momentary ADD as it seems I lose my ability to focus and therefore do stupid things.  Like this morning, I was so uncertain about how to maneuver the loading and board process I felt a bit like a fish out of water. I followed a few people toward the ship and then asked an older lady about the process. She had obviously made a Costco run in Juneau and was unloading a van full of items. She explained what I needed to do and said just to make sure I was at the right ferry. I would find the name on my boarding pass. As I reached for my pass I realized I didn’t have it any longer. Apparently I had either left it on the table in the main check in building or lost it somewhere in between. “Dag-Nabbers” I said, and off I went in search of lost articles. Thanks be to God, after backtracking my 2 block walk, there it was still lying on the bag tag table!

Am on the ferry now, a 4 hour ride from Juneau to Sitka. It has all the comforts of home and a beautiful scenery to watch. We travel at about 30 knots and seen several bears. Unfortuantely, I was not able to get their pictures. Below is the view from inside the ferry as well as one of approaching the terminal in Sitka. 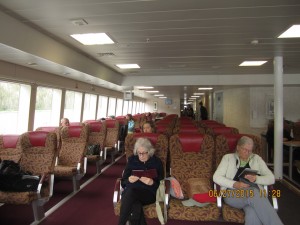 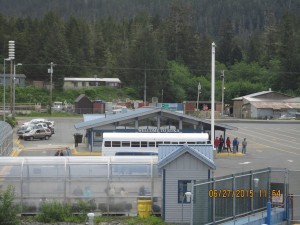