EMBARRASSING REALITIES – This week’s classic funny involves a trip to McDonald’s.  On my way to the subway one morning I notice a McDonald’s down the side street (8th Avenue), only a block off my regular path.   I thought about it that night and worked myself up for an Egg McMuffin the next morning.  I left a little earlier than usual and set out with enough time to make a side trip for that Egg McMuffin I’d been dreaming of.  I don’t like getting off my path for fear I’ll get lost but I wouldn’t be going far, what could possibly go wrong.

I trot right into McDonald’s, go to the counter, and order a coffee and an Egg McMuffin.  The clerk responds with what size coffee, and I say “small”.  He then asks, “do you want the Egg White Muffin?” and that’s a new question for me but not wanting to be a bother (and always assuming I must have missed something) I say “sure.”  I kind of look around thinking this is a new style McDonalds but after all, it’s New York.  Things are different here and I’m focused on getting in, getting my treat, and getting back on my path.

As I’m waiting for my McMuffin I notice coffee is being delivered in Starbuck’s cups.  “When did McDonald’s start serving Starbucks coffee?”, I wonder to myself.   Then I get my Muffin and it is in a Starbuck’s bag.  Things start to come together, and I finally realize I’m not at McDonalds.  It’s one door down from Starbucks.  Ugh!  Now I know why the clerk looked so strange when I couldn’t get my McDonalds app to work to pay for my order.  I finally just paid in cash!  I know he was relieved to see me go . . ..

FOOD – New York food is wonderful.  A block from me is a bagel shop that is terrific.  Nothing like a fresh bagel and cream cheese on my way to the subway.  That’s going to be a good 10 pounds by the end of my time here!  I also had PIZZA this week.  A slice of deep-dish Stromboli . . . Oh so good and only $5.00.  And there’s a Whole Foods Market about 3 blocks from me that I’ve found to be wonderful on those days when you just want something fresh from their deli!

CHURCH: ST. JOHN THE DIVINE CATHEDRAL – This week I attended St. John the Divine in Upper Manhattan (112th & Amsterdam Avenue).  This church is the Episcopal cathedral church of the Episcopal Diocese of New York. Measured by length or internal volume, it is one of the five largest church buildings in the world.  Construction of the Cathedral began in 1892, making it over 125 years old. 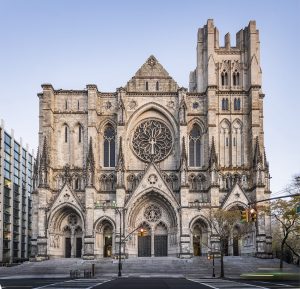 The Sunday service was held in the Nave (with no air conditioning) to a small group of parishioners and visitors.  The Very Reverend Patrick Malloy and the Reverend Canon Victor Conrado greeted me outside on the steps as they had a slight breeze that was providing some relief from the heat.  We visited a bit and I learned that Rev. Malloy spent quite a few years teaching at Notre Dame and Rev Conrado’s wife was born in San Antonio.  The Conrado’s attended church at St. Thomas a couple years ago but missed meeting our St. Thomas rector, Father Mike Michie, who just happened to be away that Sunday.  Small world!  All in all, the cathedral was a beautiful setting and a beautiful ‘high church’ service. Despite the heat, I’m so glad I was able to see it and attend services there in person.

After church I took the opportunity to see Morningside Heights Park which also has an interesting history.  Also walked around to several of the green spaces renovated by the New York Restoration Project.  This non-profit organization has planted trees, renovated gardens, restored parks, and transformed open space for communities throughout New York City’s five boroughs.  It was founded in 1995 by Bette Midler when she returned to New York from Los Angeles and saw the horrific condition they were in.

After walking around for a couple hours, I went to the bus stop thinking I would return home via a bus so I could see more of the landscape.  I waited at the first bus stop for 30 minutes until a bus (not the one I needed) stopped and I asked about the bus I was waiting for.  She said it was not coming due to diversions and re-routings resulting from the New York Marathon.  I should move to another stop about 10 blocks away.

I arrived at the second bus stop where several locals were waiting . . . and waiting . . . and waiting.  45 minutes later we learned no bus would arrive there either and we should move to another stop about one mile away.  Another choice was a 15-minute walk to the subway.  By this time, I am drenched in sweat and so hot (remember, the temp is upper 90’s and heat index is triple digits).  I opted to walk to the subway and made it but only after stopping for water and downing a 20-ounce bottle in practically one long drink!  Rode the subway back and then opted for a local bus to go the six blocks to my home.  I arrived about 3:30, had no voice (laryngitis found its way to me) and was asleep by 5pm.  I slept until 7 a.m. this morning (Monday) and thanked God it was my day off!

LETTERS FROM FRIENDS –  A big shout out to Luke & Jack for their artwork and letters.  I so love getting these.  And to Katelyn and London for their letters, which made my day when they arrived this week.  And finally, to daughters Jennifer & Melissa who always surprise me with letters and gifts.  You are way to kind to your momma!

IT HAS BEEN A REALLY HOT WEEK – Well, the word to remember for this week is HYDRATE!  Just like most of the nation, New York has had its share of high temps and high heat indexes.  I started my week on Tuesday which was a day to remember at Liberty Island.  We had tons of visitors, the temps were in the upper 90’s, and the heat index was triple digits.  We had 7-8 medical emergencies and a very challenging day unlike any our seasoned rangers had seen in many years.

To follow that, on Thursday we had storms with sighted tornados that never touched down (thank goodness) but the sky opened, and the rain came down in sheets!  Visitors were drenched but it was a moment’s relief from the heat for sure.  Unfortunately, the steam from the concrete when the rain stopped was a very  unwelcome side benefit.

Then on my final day for the week, Saturday, it was a calm day until about 3:00 in the afternoon (I normally leave at 5:20 and the island closes at 5:30 with the final ferry leaving at 6:15) when we had one emergency after another.  In total were more than seven medical emergencies including a heart attack, heat stroke, dislocated knee, rolled ankles, etc.  And while that was happening, we also had someone place a lit cigarette into a trash can which started a small fire.  The island EMTs and Park Rangers were amazing.  Their expertise, reaction time, care and concern were exceptional.  We even needed someone fluent in Spanish and another in French . . . no problem, we have Rangers fluent in multiple languages.  The police boat was here and made multiple runs to take folks to the hospital.  It was so impressive to watch this team in action.  Kudos to each and every one of them.

What a week!  Can’t wait to see what this week brings.  Be Safe all and remember to HYDRATE!  Hugs and love coming your way,